Skip to content
Previous Next
Behind the Scenes with Penn & Teller: Fool Us – Pt. 3

BEHIND THE SCENES WITH 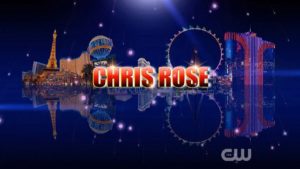 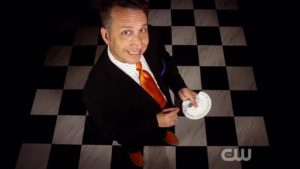 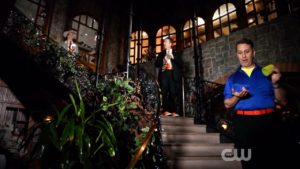 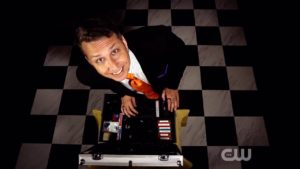 The stage director had me standing behind a table, while he directed the audience to look up at the screens (on the left and right side of the stage) to see my opening interview. During this time, I had an opportunity to stop, take a deep breath and scan the room.  I started scanning the auditorium from the left to the right and suddenly stopped in the center, thinking, “Holy crap, this is real! There they are…don’t look at ‘em’!” I took another nervous deep breath, swallowed hard, mentally regained my composure, and continued scanning the rest of the audience.  It felt like time had stopped.

When Allison introduced me, we went straight into the routine. I asked Teller and Allison to join me onstage, and it was at that moment that I realized Teller and I are the same height. I wasn’t expecting that. I couldn’t help but notice that his eyes were like a hawk as he watched my EVERY move. (No pressure, right?)  Because I was so nervous, I had a couple of hiccups early in the routine and I mentally wanted to shout, “CUT”. Thankfully, the words remained inside my head never escaping my mouth, because I knew that there were no “CUTS” in a LIVE performance.  So I powered through it just like I would in any other live performance. To say that I was nervous would be quite an understatement… but in the end, I believe that everyone there was entertained. 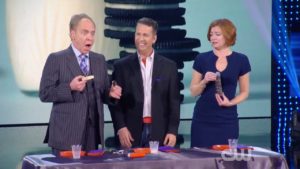 I stepped in front of the tables to have a conversation with Allison while Penn and Teller deliberated.  When Teller decided to eat the cookie that had just come out of my mouth, all of the attention went quickly to them. 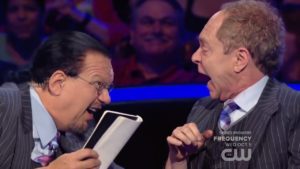 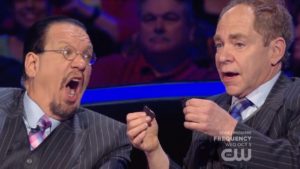 If you’ve seen the video, then you know what I’m about talking about.

Penn started chatting with me about how they thought the routine was accomplished. As with every other performer on the show, they were very complimentary and tipped their hand indicating that they understood how I did the nail trick. When they started talking about the cookie bit, and I was genuinely surprised with the direction they went… and they were wrong.

Let me preface this next part with the statement — I NEVER expected to hear the words ‘you fooled us’…directed to me…out of Penn Jillette’s mouth. Even during my taped interview with Olu, he asked me “So, are you going to fool Penn & Teller?” My exact response was “Pfftt! No” 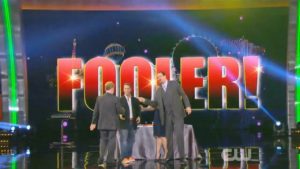 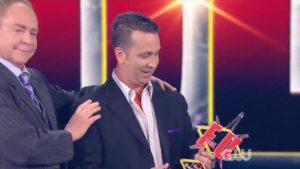 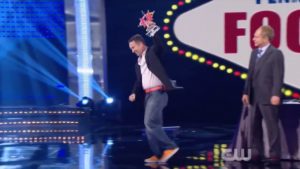 I just fooled Penn and Teller!!

The next thing I know, Penn and Teller are on stage with Alison and me, Teller is handing me a trophy, I’m shaking hands with the three of them. STUNNED.

I leave the stage and three guys approach me quickly: one to take my microphone, one to take away the trophy, and one to say, “follow me.” The third guy leads me down one hallway, turns left down another hallway, and leaves me there by myself. By myself. He says that he will come back to get me in just a minute. So for the next few minutes, I’m numbly standing in an abandoned hallway just trying to get a hold of what…just…happened. Upon his return, we go downstairs to pick up my stuff.  The prop crew had put everything I packed onto my little trolley.  The guy told me to follow him again and I was suddenly lead out of the theater.  Sam (who took care of contracts and payroll) and I ran into each other again and she stopped me give me a quick hug and whispers to me “Remember…Shh…you can’t tell anyone what happened” 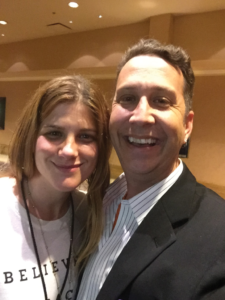 According to my contract, I am not allowed tell anybody what happened until after my segments airs. That meant that for an unknown time frame, I had to keep my mouth shut about what was such an incredible moment in my life.  I couldn’t share it with my family or my closest friends!  It was definitely one of the hardest things I’ve ever had to do.  I was over the top excited, and I couldn’t share the news with anyone “publicly”.  I went to my room, still in disbelief, and called my wife to tell her the good news. I believe her exact words were, “Shut up!” I think she must’ve said/shouted/squealed that at least 20 times…in less than three minutes. 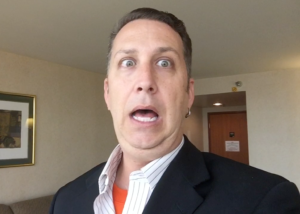